Circle convention 2nd International Women Circle to be held in March 22nd to 24th in Bilbao, in Amalurra. A very special Circle where I would love to share with powerful Women the meaning we, from our feminine essence, give to Success, Abundance and Competence, as well as the values that lay underneath our Feminine way of Leadership. You can Join us HERE.

Upon my feeling, there is a feminine and a masculine principle in all of us. We, as women, are nearer to the feminine essence, but it lives also in men, it is present in them as well. Far beyond sex or social gender construction, the feminine and the masculine principles inspire a very different way of doing things. We, as women, embraced the masculine way of doing things in the professional field when we started to be present in the professional arena, but it has come the time to show up and incorporate the feminine principle also to the business and professional way of doing things. To build together a new business and professional scenario.
I know that the message can be misunderstood, as at least in Spain, there is a sour confrontation between «feminism» and the so-called patriarcal society. We should overcome that fight, as it leads us to nowhere. Both, the feminine and the masculine principles are needed to give birth to balance, to a new way of doing things. A lot has been done in the formal aspects of gender equality.  Academically speaking, gender is just the social construction of the resources and the roles we give to the male and female individuals amidst our specie, in our culture. We, as women, have been part of the society as we live in it. We have also been part of that gender preservation, as most of us have brought up the children to become adults in this society, so we have taken part in its current construction, and we definitively must be part of its future shaping. The clearer our voice, the more powerful our path.
The day has come to enhance our clarity in order to share with the world the undeniable differences that lay underneath the Feminine way of doing things. The difference we can make doing things from the feminine essence, from the feminine principle inhabiting in all of us. I have read in LinkedIn 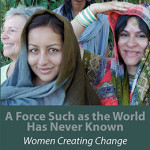 I convene this Circle sure that you will be there, supporting it with your energy. Feeling your presence beside me. I need to feel that force, the force that Matthew Arnold named back in the XIXth century, as «a force such as the world has never known», thriving to show up in the Circle. I would love to feel that this 2nd International Women Circle can contribute to the clarity we need to show up and share from the Feminine not just in Circles, but anywhere, wherever we are, to give and share the gifts that came into the world through us.
Thank you for being there. Thank you for being part of this Circle. Join us HERE
ps: Matthew Arnold (1822-1888): “If ever there comes a time when women of the World come together purely and simply for the Benefit of [hu]mankind, It will be a Force such as the World has never know!”, thanks to Women Creating Change by Sharon Mijares, Aliaa Rafea and Nahid Angha.
]]>